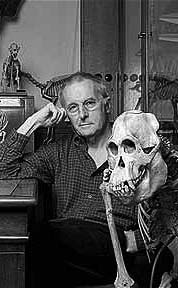 John Stephen Jones is a Welsh geneticist and from 1995 to 1999 and 2008 to June 2010 was Head of the Department of Genetics, Evolution and Environment at University College London.[3][4] His studies are conducted in the Galton Laboratory. He is also a television presenter and a prize-winning author on the subject of biology, especially evolution. He is one of the contemporary popular writers on evolution. In 1996 his writing won him the Royal Society Michael Faraday Prize "for his numerous, wide ranging contributions to the public understanding of science in areas such as human evolution and variation, race, sex, inherited disease and genetic manipulation through his many broadcasts on radio and television, his lectures, popular science books, and his regular science column in The Daily Telegraph and contributions to other newspaper media".